In 1933, Mr. C. G. Fuller and Senator Edgar Brown picked out this property, which was bought by Mr. Fuller and donated to Barnwell County, to be used as a 9 hole public golf course.  The area was called Sweetwater due to the taste of the springs where the ponds now exist.

Mr. A. Kemp from Belgium designed the course and clubhouse, and both were constructed with WPA labor.  In 1954–1955 the swimming pool was added along with the pro shop and bathhouse. The members, in house, financed this endeavor.

In 1958 the greens, which were common Bermuda were changed to the new Hybrid 328 Bermuda.  In 1974 the membership voted to assess all member $50 per year for 10 years to remodel the clubhouse, pro shop and add a ballroom.

In 1975 the Zissett property was purchased to add 9 additional holes.  This side was designed by Russell Breeden and built by Jones and Lindsey, doing the dirt work.  Simmons Irrigation did the irrigation and the Sweetwater staff did the trap and grass work.

After the irrigation system was updated, the new nine was opened for play in 1977. The fairways were the next major project, being converted to 419 Bermuda in 1996.   Sweetwater modernized the greens by changing the grass to Mini-Verdi Bermuda in the spring of 2008. 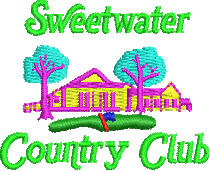